As a National Trust member I’m generally approving, though (as they say) with reservations. I’m not sure about some of the narratives the NT spins to brand its stately homes, especially the way those narratives can sit light to the sources of the wealth and power that built the estates – slavery and land clearances for a start. But then again, the NT does have some real treasures in its custody.

On a visit to Eyam Hall in Derbyshire last summer, I stumbled across an unexpected gem: wrapped in clear plastic and lying in a drawer was the rather beautiful jacket of Captain Peter Wright of the Eyam company of the South Battalion of High Peak Volunteers. This battalion – like its Northern counterpart – was an 1805 amalgamation of disparate, far flung, rural companies raised two years earlier, so the jacket has to date to 1805-08. At first glance it looked predictable enough: scarlet with the yellow facings of Derbyshire, no lace, small gilt buttons (crown over script “HPV”), white edging and one gilt epaulette for a captain. But even without permission to move or unwrap the jacket, I could see that it was, unusually, single breasted, with no lapels. Accompanying it was a rather stagey tricorne hat which, contrary to the optimistic labelling of the exhibit, clearly had zero to do with the jacket. [Click images below for enlarged slides.]

I took some fairly useless snaps with my phone and trotted off to have a word with a member of staff. The volunteer attendant I buttonholed seemed sceptical about my revelation concerning the impostor hat, and, overall, politely indifferent. Later, I wrote to request a proper viewing, quoting my NT membership number, but never had a reply, just as I’ve never had a reply from Powis Castle about the yeomanry standards they have in storage. Well, people are busy and resources are tight, I suppose. But a bit of a low peak, all the same.

Fortunately, I find that in 2014 John Alleston documented the jacket in the Bulletin of the Military Historical Society. His pukka photos show two buttons at the rear waist, with four on each slash pocket flap, white edging on flaps and skirts, and white turnbacks without any ornaments at the points. The epaulette bears a bullion crown over script “HPV”, while the crescent, though this isn’t stated, looks to be edged with yellow cloth. (The crown on this epaulette is confusing, crowns being also the later mark of a lieutenant colonel’s two epaulettes, but here the crown is a part of a battalion distinction with the initials beneath, repeating the design of the buttons.)

Even allowing for the inclination of volunteer corps to dress their other ranks in superior grades of clothing, this doesn’t seem to be a private’s jacket, and there are no light company indications. It must surely be an undress garment, worn as an alternative to the officer’s coat? Or were the battalion’s officers universally in jackets for dress? Whatever the case, it’s a fine little item. By the way, don’t go looking for it among the nearly one million items on the National Trust Collections site; it isn’t there.

No posts for nine months here is pretty poor. Sorry to have slid off the blog wagon.

As I clamber awkwardly back on, let’s join in the applause for Mike Leigh’s acclaimed film of Peterloo. If you haven’t seen it, do so, if possible on the big screen. Be prepared for a couple of hours of wonderful period oratory, as Leigh builds the arguments on either side, moving towards his climactic, seat-gripping and astonishing reconstruction of the mass meeting at St Peter’s Fields. Here the Hussars come out of it relatively well, one officer at least urging restraint. (Though the infantry look a bit Peninsular for 1819, surely?) But the Manchester and Salford Yeomanry are played as oafish John Bulls, amateurs without discipline. Which could be a fair picture, given the number of unarmed civilians they managed to sabre. I suppose this is what happens when the focus of auxiliary forces moves from defence against invasion to the maintenance of internal “order”. 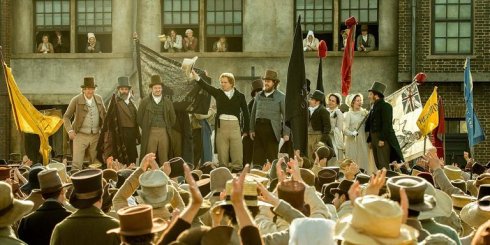 In the film the Yeomanry wear the light dragoon outfit of the period, as shown in the well known Richard Carlile print of the massacre; since Carlile was on the platform during the mayhem, we can take that as accurate enough. These three troops were raised fresh in 1817, and were disbanded within five years. Not too much continuity then with their predecessors, the Manchester and Salford Light Horse Volunteers, raised in 1797, reformed in 1803 and apparently disbanded in 1809. This seems like a good opportunity to take a quick look at them.

The Light Horse began life as three troops, but in 1798 increased to six under Lieutenant Colonel Comm John Ford. Manchester Library has two copies, for 1797 and 1798, of their Regulating Code of Laws, providing many invaluable details of dress and equipment:

Every Volunteer at his own expence to furnish himself with the following cloathing, arms & accoutrements, all made to pattern: a regimental bridle and saddle, with cloak-pad, and straps; a cartouch box, containing four rounds, fixed on the outside of each holster; a sabre, a buff leather sword knot whited, a black spanish leather waist belt, a pistol, a regimental blue coat-cloak, with white collar and lining; a dress uniform … and an undress … ; each Commissioned Officer to procure a crimson silk sash.

The Undress is a plain blue jacket, corresponding, with the exception of lace; pantaloons of blue cloth with white seams, lined with blue cloth, and half boots …

Further details follow for farriers, trumpeters and “Serjeants in Pay”. For off duty wear, “such gentlemen as chuse it” could wear a blue undress coat with black velvet facings and regimental buttons, which on this coat were to be flat and gilt, with the raised letters “L.H.V.” By 1798 silver chain wings had been added to the dress jacket, and scale wings to the undress.

A fine pastel portrait of Robert Keymer, the colonel by 1800, was made by John Russell in that year and presented to his family by the regiment; the Lancashire folder of the late R J Smith included a photo of this, with detailed notes made by Leslie Barlow when the portrait passed through Christie’s. Keymer’s dark blue dress jacket, of an “Austrian” length, is edged with 3/8″ silver lace and looped with silver cord of about 1/8″. The white collar and cuffs are edged with silver lace and cord on a blue ground. The surprisingly broad black leather waist belt fastens with  a simple white metal buckle, and no sash, pouch or pouch belt are visible. The Tarleton helmet here has a red over white plume, a dark crimson turban and silvered fittings. The visible part of the ribbon reads “M&S LIGHT …”

According to Willson’s 1806 chart and Aston’s 1804 Manchester Guide, the 1803 formation of the Light Horse, now just two troops under Major Shakespear Philips, switched to scarlet jackets faced dark blue, with blue pantaloons or white breeches and silver metal. “The gentlemen are mounted in general upon capital horses,” noted Aston. “Their arms are sabres and pistols. They serve without pay and were individually at the expense of their own appointments.”

Despite such enthusiasm, within a few years these remaining two troops had disbanded, and Manchester had to manage without its yeomanry, until post-war discontent prompted a darker chapter.