The Dorsets and Nancy Dawson

Period newspaper reports of reviews and inspections of militia or volunteers are mostly uninformative but routinely flattering; every unit, no matter how unrehearsed, receives the highest encomiums for going through its motions in a manner that would have done credit to the most seasoned veterans etc etc. But here’s one with a couple of points of rather more interest, from the Derby Mercury of 30 October 1761, in which the King, “mounted on a beautiful Cream-coloured Stone Horse”, reviews the Dorsetshire Militia in Hyde Park:

… the Men were well sized, and made a very noble and martial Appearance; they went thro’ their Exercise, Evolutions and Firings, with a Dexterity which charmed and surprized the numerous Spectators; among other Particulars, the Fifes played several Tunes, as Nancy Dawson, &c. &c. the Drummer beating with one Stick, imitating Tabor and Pipe, and all the Officers and Men in their marching kept the most exact Time to the Music with the Motion of their Feet, in the most delightful and beautiful manner; they likewise represented a Scene as if defeated, and all ran five hundred different Ways at once amongst the Crowd, and all of a sudden every Man in a few Minutes Time was in his Place again, to the Astonishment of the Beholders.

The “astonishing” dispersal and re-assembly is curious; I don’t recall hearing of this before, and, needless to say, nothing like it appears in The Manual Exercise, for the Dorsetshire Regiment of Militia of 1759. I was put in mind of some aspects of modern continuity drill. (But didn’t Ellsworth’s Zouave Cadets of Chicago originate continuity drill in 1859?) Or was this a light infantry movement? But again, this is 1761, and light infantry have not yet been invented, at least not in the British service. 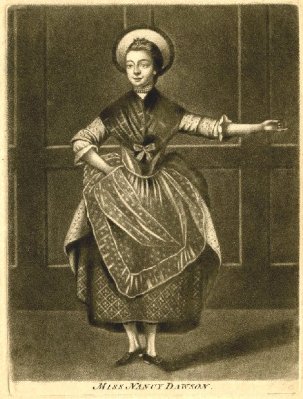 As for the music, the method of drumming is interesting; was the one-man pipe and tabor that it imitated still popular in the mid-eighteenth century? I imagine so. It’s a pity we’re not told of the rest of the folk/pop medley, but Nancy Dawson, or Miss Dawson’s Hornpipe, supposedly by Thomas Arne, was the hit melody of the day, as performed (as Wikipedia tells me) by the eponymous dancer and actress – real name Ann Newton – in the intervals to John Gay’s Beggar’s Opera. The title seems later to have become confused with Here we go round the Mulberry Bush, A-roving and other quite unrelated stuff, but the original tune is perfectly distinct; there’s a decent version here, though this fife and drum performance, while clearly authentic, seems a little ploddy, and one wants something rather more lively.

In their first embodiment the Dorsets seem to have been a showy and affluent lot, judging by Reynolds’ portrait of Lieutenant Sir Gerard Napier (above, also huge enlargement here); I visualise the Hyde Park sunlight sparkling from his lashings of gold lace as the regiment steps out in one body, the Motion of their Feet in exact Time to the fife and drum of Nancy Dawson.

What a pretty thing war can be at times! A shame it has to be marred by such cruelty and violence …