Georgian buttons are one thing, but designs for Georgian buttons are a tad unusual, especially if the identity of the designer is known. So here’s a leaf from the “Phillp album” housed at Birmingham Archives but now thoughtfully scanned online, at least in part. [Click all images to enlarge.]

John Phillp may have been the “natural” son of legendary Birmingham industrialist Matthew Boulton. He arrived at Boulton’s Soho mint and manufactory in 1793, in his mid ‘teens, and soon became a talented designer of metalware, medals, tokens and much else. The album is a fascinating browse (start here), containing sketches of all sorts, including the sheet of designs for officers’ buttons for the North Yorkshire Militia, presumably for the firm of Boulton & Scale. (In the online image the sheet is reversed, so I’ve re-reversed it here. Excuse a portion of the website’s “watermark” in the close-up.)

Other pages of the album include a design for a drum major’s staff head (described as a “hilt”) for the Loyal Birmingham Volunteers, and a rather solemn and sensitive image of a teenage boy that may well be a self portrait. Phillp died in his late thirties, in 1815. 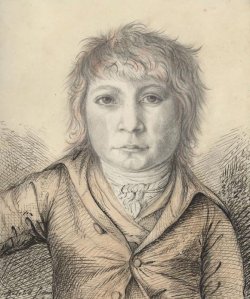 John Phillp: a possible self portrait

The central of the three buttons is listed as 276 in Ripley & Darmanin’s English Infantry Militia Buttons 1757-1881 and as 165 in Ripley & Moodie’s Local Militia Buttons. I’ve not seen any evidence that the other two designs were ever manufactured. Presumably this one was the choice of Colonel Lord Dundas.

In the mid ‘seventies there was an officer’s jacket with buttons of this design on display at York Castle, attributed to the 5th North Yorkshire Local Militia, though Ripley & Moodie list this button for the 2nd NYLM. As the jacket itself was silent on the matter, while a different, unit specific, button is known for the 5th, who can tell? I made a sketch of the jacket at the Castle at the time, but since then it seems to have travelled on to the Green Howards Museum.